Another garbled science post from the Comparative Literature major:

I hate to fly.  When people ask why I hate to fly, I usually answer that I am almost always convinced two or three times during every flight that I will die a fiery death when the plane crashes.  Whenever I leave on a flight, I make sure to tell my husband that if the plane goes down, he should know that I love him and my last thoughts were of him and my family.

From this evidence, most people would say I have a fear of flying.  I guess they're right.  Unfortunately, I live in a city where none of my family or my husband's family live.   Plus, I really like to travel to faraway places.  So, I end up flying a lot!

Because of this condition, I never pay attention to news of plane crashes as I need no new evidence of the danger of flying.  I know driving is much more dangerous, but the news shows don't incessantly cover car crashes.  (It's been a tough week, ignoring all the news.) 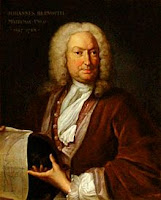 What does Bernoulli have to do with my nervousness?

Well, in my liberal arts mind, he's a sciency gentleman who somehow had something to do with the design of an airplane wing, or maybe he was the first person to prove that lift worked?  I'm not sure.  But in my personal reality, it's directly because of this dude that any plane I am in is able to take off, stay in the air and land safely.

(I know, I know, I should have done some googly research that would make me sound smarter, but that would have displaced some other useless information stored in my brain cells.  I mean, look at the guy.  He's from way farther back in the past than I thought.  There's not even a photograph of him!  If he did all the hard science work, why haven't people been afraid to fly for a much longer time?)

My normal method of coping anytime there is takeoff, turbulence, the plane turns by dipping one side toward the ground, weird noises, landing, etc. is to simply chant the full title of this post either out loud or in my head depending on my seat partner.  (My husband looks at me as if I am a bizarro, but with much more love than the strangers who hear my song.)

Recently, however, my unshakeable faith in Bernoulli's ability to keep me flying has indeed been shaken.  Apparently, extreme heat somehow makes Bernoulli's theories less effective, especially for smaller planes.   With the heat wave in the southwest, many smaller planes were grounded.

I'm not sure what this news means for my relationship with Bernoulli, but I might be searching for another guru to lead me safely through the skies. Know anyone I should check out?

susie
I'm an education professional taking a yearlong leave of absence. I live in the upper Midwest. I write every day.